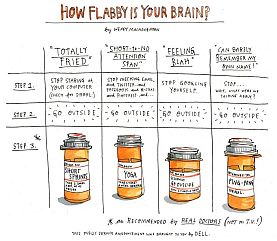 You may just be more likely to find your car in the parking lot if you’ve briskly walked there. Why? Because your brain needs physical exercise as much as your body does. You can get a date without abs, but just try getting that attractive stranger to go out with you if you forget your prospect’s name.

Kids are toning up, tuning in

Lauren Anastos (left) and Jaclyn Diemer, both 11, throw a ball in a sit-up position during the morning gym class at Lillian M. Jacobs Elementary School in Hull. (photos by Kayana Szymczak for the Boston Globe)
By Johanna Seltz
HULL — Teachers at Jacobs Elementary School don’t mind when theirstudents get to class a little sweaty and out of breath. That’s because the youngsters coming from the school’s early-morning exercise class seem better able to stay in their seats for the rest of the day.

Researchers Now Understand How Shock Therapy Affects Depression.
Electric shock therapy has been used to treat depression for more than 70 years. And now, doctors say they know how it works. Electroconvulsive therapy—as controversial as it is effective—appears to dampen an overactive connection between two parts of the brain involved in emotional processing, thinking, and concentration. It affects the way these parts of the brain communicate with each other, according to a study published Monday in the Proceedings of the National Academy of Sciences. Electric shock therapy, first used in 1937, sends a brief electric current to the brain....